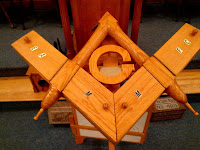 We had a wonderful time in Carp tonight at the installation of WM Bro Jace Baart and the investiture of his officers.  It was well attended and as the last installation of the season, it was my last official duty before hosting the district Meeting at the Chateau Royal York in July.
Carleton has certainly been a friend to me and i have enjoyed thier fraternity and support. 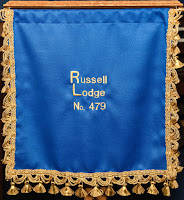 We had a great night at Russel lodge for their Installation and Investiture of officers.  58 Brethren turned out to see W Bro Malcolm Gutfriend install Norm Hotchkiss in the Chair of King Solomon for a second time.  W Bro Hotchkiss and I were traveling companions in 2012 and this marked the 3rd member of that traveling group to take the Chair this year.
The night was warm but the atmosphere was light and jovial.
Thank you to the Brethren of Russell Lodge for the support they have shown myself and the District over the last year.
Posted by Ottawa 1 DDGM at 4:55 AM 1 comment: 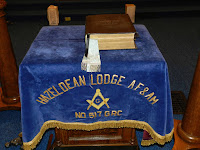 Tonight we saw W Bro Bart Seaton installed into the Chair of King Solomon for the 2nd consecutive year.  This will be the third time W Bro Bart Seaton has been a Master of the Lodge.  The Ceremony of Installation was an abbreviated version and as a result the evening was short and sweet.  The work of the evening was done well and Hazeldean Lodge should be proud of themselves.  It was very nice to sit in Lodge with RW Bro Brian Koivu again, who was in town from Sudbury, to see Bro Al Lamentine invested as Senior Warden. 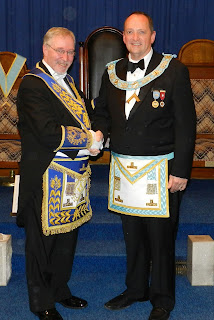 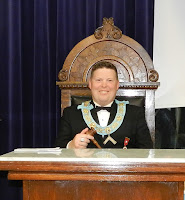 It was very fortunate for me that St. John's 63 had to postpone the Installation of there Master Elect Bro Joe Teschek by one month.  The original date conflicted with another installation that I was attending and it would have been unfortunate for me to miss this; as W Bro Echlin is a good friend and former traveling companion of my Masters year 2012-2013.
The evening began with the festive board at 6:30 and the Lodge tyled sharp at 7:30.
The night was cool and as a result the Lodge room was comfortable and relaxed.
Bro Echlin and his team put on a stellar textbook installation and should be very proud of themselves. 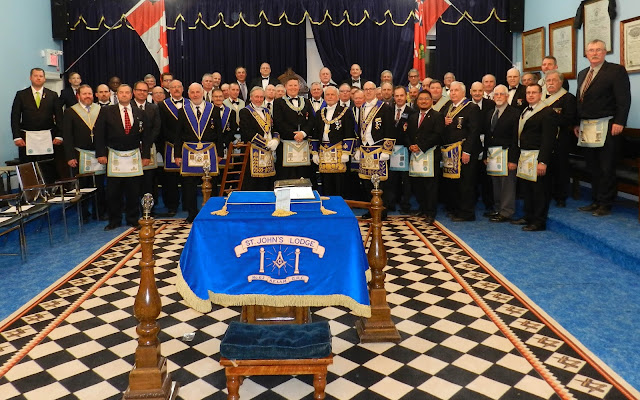 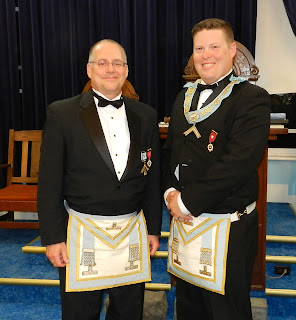 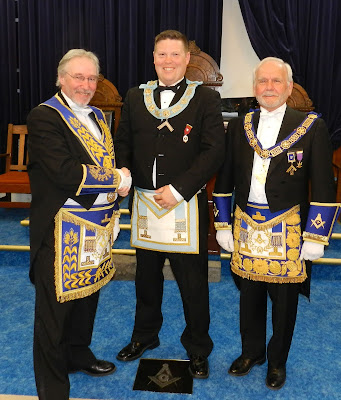 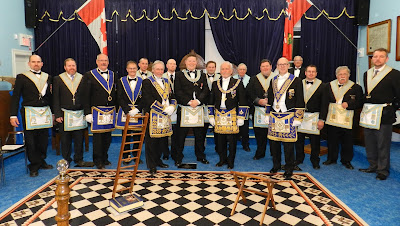 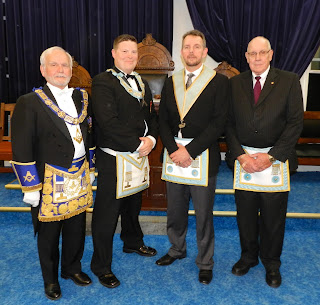 It was a jam packed and highly impressive group of Masons from all over the province to witness RWB Barry Burchill install his son, Bro Ken Burchill into the Chair of King Solomon.  The was so little floor space that it made it very challenging for the members to move about much less perambulate.  In attendance was our Grand Master MWB John C Green,  2 PGMs; MWB Gary Atkinson and MWB Don Mumby, the DGM RWB Paul E Todd, the DDGM from District 2 RWB Richard Loomes, the GSW Robert Ledingham, myself and half the Board of General Purposes.  The evening went very well with all 3 MWs as well as the DGM taking part in the ceremony.
At the end of the night I presented RWB Burchill with his Past Masters Certificate.

All the Brethren Assembled 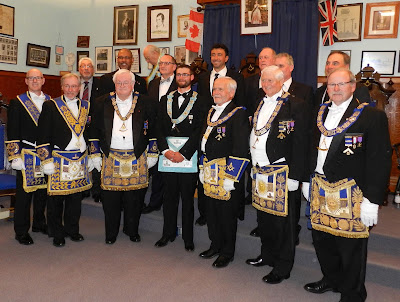 Current Grand Lodge officers with the Masters of 2016-2017 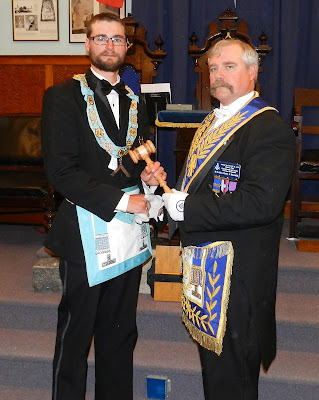 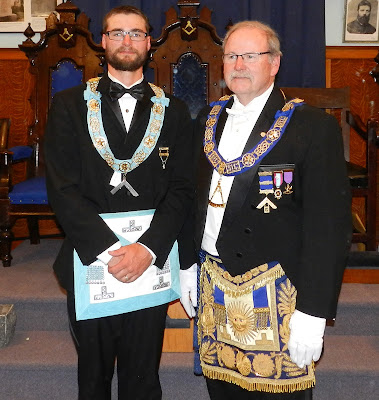 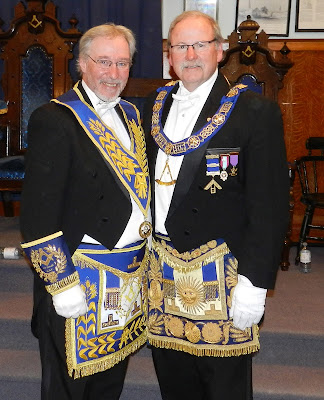 MWB Atkinson and I
Posted by Ottawa 1 DDGM at 5:48 AM No comments: 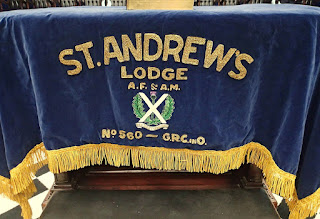 Tonight was a special night as it was the night that St Andrew's would be forming the team that would lead them into 2016-2017, but it was also the last time I would be in my Mother Lodge as a sitting DDGM.  I had the privilege of sitting beside MW Bro Don Mumby and of course that night my introduction of the Past Grand Lodge Officers wasn't as stellar as it could have been.
The night went well and was highlighted with the presentation of a 60 year a Mason pin to W Bro Kieth Bisset.  This was personally very rewarding to me as Kieth has been and remains an inspiration to me and it seemed fitting that a DDGM from Kieth's Mother Lodge be involved in the presentation.  Visitors came from as far as Galveston Tx and Gary had a special visitor RWB Robert McLeod, DDGM of District 3 in the Grand Jurisdiction of New Brunswick.  RWB McLeod is also a Past Master of Temple Lodge here in District 1
W Bro Gary MacLean was placed in the Chair of King Solomon and after pictures, the Lodge retired to the banquet room for a meal of roast chicken.
A good night all round.  Congratulations to W Bro MacLean and his Officer line up (of which I am one...historian). 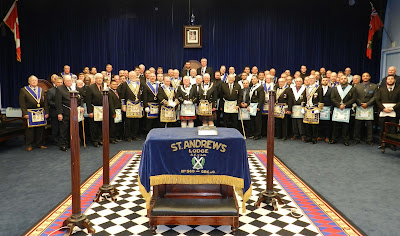 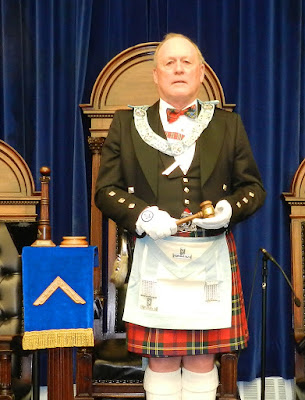 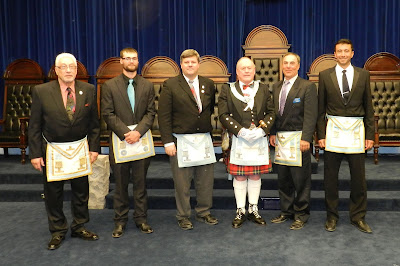 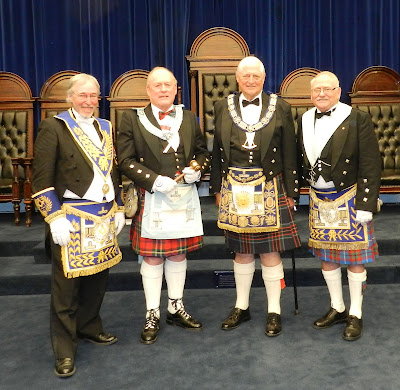 Mississippi Lodge Installation of Officers May 19, 2016 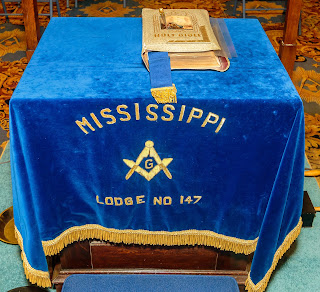 Tonight I had a rare privilege of sitting with the Grand master MWB John C Green at the installation of officers in Almonte.  The room was packed with brethren from around the district as well as the Senior Officers of Grand Lodge as they finished up the eastern leg of their Grand Lodge tour.
The Installation went off very well, as expected, and W Brother Kevin Ziegler was placed in the Chair of King Solomon for the second time in his Masonic career.  W Bro Ziegler and I were traveling companions in 2012-13 when he was Master of Goodwood Lodge.  This was a night that many of the Brethren could actually meet many of the RW Brothers that were running for office at Grand Lodge and get to know them a little.
What I considered to be the highlight of the night was the Grand Master and I presented VW Bro Graham Hudson with his 60 year a Mason pin ans well as his 50 year a Past Master pin.  These accomplishments are far and few between and I was very proud to be a part of honoring VW Brother Hudson in open Lodge.
The Festive Board was held off site at the Healey Dome, however I had to pass as I had an early morning the next day.
Congratulations to W Bro Ziegler and his team. 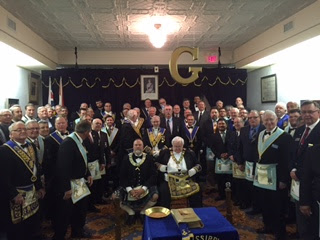 The Brethren assembled at Mississippi Lodge

Ottawa 1 DDGM
R.W. Bro. Angus Gillis is the District Deputy Grand Master of Ottawa District 1 for 2015-16. R.W. Bro. Gillis is a Past Master of St. Andrew's Lodge #560, and is a member of Chapter 222 of Royal Arch Masonry. He is also a Fellow of the College of Freemasonry, and a strong proponent of education. R.W. Bro. Gillis is married to his Lady Kathy, and together, have a 25-year old son James. R.W. Bro. Gillis' profession for the past 20 years has been in Healthcare, primarily caring for the aged and infirmed. For the last 40 years, R.W. Bro. Gillis has been an avid motorcyclist and he sits on the executive committees of various motorcycle associations. In 2014, R.W. Bro. Gillis was successfully able to join his passion for Masonry with his love of motorcycles. He founded the National Capital Chapter of the Widow's Sons, a Masonic Motorcycle Riding Association whose mandate is to help the Widows and Orphans of Masons.